If one could conceive of a single elixir to improve the physical and mental health of millions of Americans — at no personal cost — what value would our society place on it?

Going a step further, if research quite conclusively showed that when consumed just once a week, this concoction would reduce mortality by 20% to 30% over a 15-year period, how urgently would we want to make it publicly available? The good news is that this miracle drug — religion, and more specifically, regular church attendance — is already in reach of most Americans. In fact, there’s a good chance it’s just a short drive away.

Indeed, health and religion are very much connected. Professor VanderWeele’s new research with colleagues at Harvard University — building on more than 20 years of prior work in this area — suggests that attending religious services brings about better physical and mental health. Adults who do so at least once a week versus not at all have been shown to have a significantly lower risk of dying over the next decade and a half. The results have been replicated in enough studies and populations to be considered quite reliable.

This science does not endorse one faith over another or suggest what society is to do with such information. But there are two opportunities — one societal and one personal — for good to come from this work. The news media, the academy and the broader public could use this new understanding to weigh religion’s greater societal value. And for individuals, this research provides a not-so-subtle invitation to reconsider what religion can do for them.

The Health Benefits
Nearly half of the country — roughly 2 in 5 Americans — reports having attended a religious service in the past week. The draw for many may be meaningful liturgy, perhaps a sense of forgiveness and ultimately, salvation. Few would say they come for good health. Why might attending services improve one’s health? The Nurses’ Health Study finds that social support is critical, yet this accounts for only about a quarter of the effect. Other mechanisms seem to be important as well, possibly due to behavioral norms at services. For instance, those attending are less likely to smoke, or more likely to quit altogether, producing significant health benefits.

Religious service attendance affects mental health, too. The research at Harvard and elsewhere indicates that, possibly due to a message of faith or hope, those who attend services are more optimistic and have lower rates of depression. The research from Harvard has also shown that attendance protects against suicide. Others have found that churchgoers report having a greater purpose in life and develop more self-control — both mechanisms by which service attendance might affect health.

Today, a greater percentage of Americans are choosing no religion at all, and we are witnessing the erosion of religious institutions. For some, church attendance is seen as quaint and outdated, and “spirituality” has become a code word for, “No thanks, I’m sleeping in on Sunday.” What this go-it-alone movement will usher out, it seems, is the benefits of being in the pews. After all, the research has shown that service attendance, rather than private spirituality or solitary practice, strongly predicts health. Something about communal religious participation appears to be essential.

Religion’s Better Angels
What to make of all this? First, the associations between religion and health should force us to reevaluate religion’s role in society and public life. Religion is often perceived negatively today, and at times it’s well earned. But the effects of religious participation are often profoundly positive, a point too often neglected or ignored. The health benefits can be added to a long list of virtues found with an active religious life.

Attending religious services has been shown to increase the likelihood of a stable marriage, to elevate one’s sense of meaning, and to expand one’s social network. It leads to greater charitable giving and more robust volunteering and civic engagement. The effects are profound across numerous domains of life. This has important implications for the extent to which society promotes and protects religious institutions, the maintenance of their nonprofit tax-exempt status, and how the contribution of such institutions is portrayed in the media, the academy, and beyond.

Who could possibly conceive of such an elixir, one that stands to change society in ways small and large, subtle and profound? We’ll leave that question to a higher power.

by Tyler J. VanderWeele of Harvard University and John Siniff 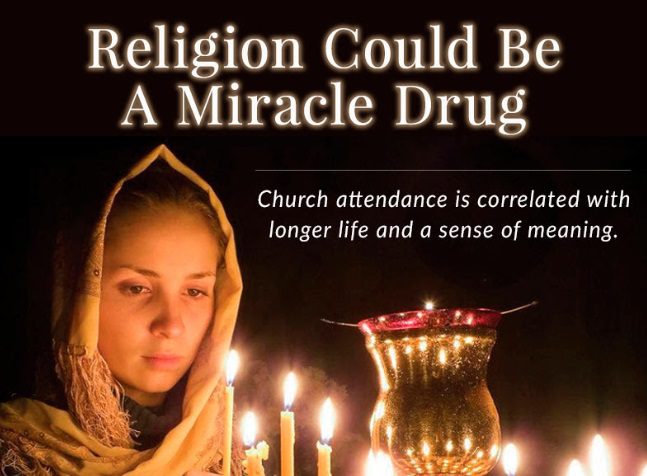